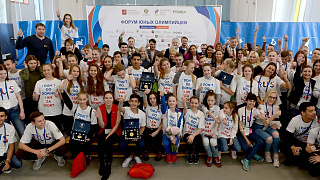 On June 1, Russian Anti-Doping Agency RUSADA and Russian Olympic Committee held the Forum of young Olympians at the Centre for sports innovation technologies and training of national teams.

They told the young Olympians about the main values of the Olympic movement, the threats to health arising from the use of prohibited substances, the basic rules that any athlete should follow during his career, and what he should not do under any circumstances.

According to Stanislav Pozdnyakov, such events have a positive impact on the image of Russian sports and serve as proof that the country is changing its attitude to doping, including children's and the youth.

- Our task is to make sure that your sports career does not depend on doping, so that you achieve high results not by manipulating prohibited substances , but due to your skill and will to win, — said the head of the ROC, addressing the boys and girls dressed in t-shirts with an eloquent inscription ZASPORT "I DON’T DO DOPING". - Today, representatives of the Russian Olympic Committee, Ministry of sports, State Duma, IOC, WADA, RUSADA, the Russian Paralympic Committee and Moscow Department of sports are in this hall with you. It means that the problem of doping in sports is one of the most important today.

The same idea was expressed in the speech of the Chairman of the State Duma Committee on physical culture, sports, tourism and youth Affairs Mikhail Degtyarev.

— 4,000 athletes arriving in October in Buenos Aires will be the guides of the Olympic ideal, - he said. - Thanks to you, the whole world will be better and the sport will be cleaner. In recent years, Russia has done a lot to change the culture of attitude to doping. I now appeal to the young Olympians, do not believe those who say that without doping it is impossible to win! This is a blatant lie!

- Today, on Children's day especially I want to believe that the new generation of athletes will compete and win only in a fair fight. I promise that the State Duma will do everything to ensure the protection of all clean athletes at the legislative level, - Mikhail Degtyarev added.

RUSADA Director General Yuriy Ganus urged participants to stay faithful to Olympic ideals.
— You bear a very heavy burden to restore confidence in Russian sport, - said the head of the Russian Anti-Doping Agency. - To win you need to believe in yourself and be able to overcome any difficulties. I invite you to cooperate with RUSADA. Please contact our hotline for any questions. We work to protect you from wrong actions.

Two-time Olympic champion in artistic swimming Alla Shishkina confirmed that before taking any, even the most harmless medicine, it is better to consult with the team doctor or RUSADA specialist.

— When I played, we called RUSADA, even if we needed to take a pill for a headache. It is always better to be safe than to risk your good name and career. Remember that all responsibility for anti-doping rule violations rests with the athlete.

According to two-time Olympic champion in gymnastics Svetlana Khorkina, an educated athlete has more chances to achieve high results.

— To win, you need to be strong, brave, healthy and, of course, have the appropriate education, including anti-doping, - said the famous athlete.

It is gratifying that the stars of Russian sports took an active part in the Forum of young Olympians. Alla Shishkina, Tagir Haybulayev, Maxim Trankov, Svetlana Khorkina and other Olympic Champions spoke during the panel discussions alongside with the representatives of IOC, WADA and RUSADA. Novice athletes received first-hand answers to such important questions as, for example, "doping — is it a fraud?"or" is it possible to win honestly in sports?"

The program of the forum also included entertainment events. Anyone could test their anti-doping knowledge at “Play true” Outreach program and team game "brain-ring", as well as shoot a photo at RUSADA stand. In addition, all participants got souvenirs and t-shirts from ZASPORT company as memory of the forum.


Video report from the event: https://youtu.be/JieFZWjfBR8