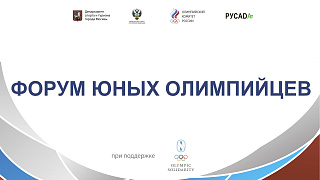 On Children's day, June 1, Moscow will host the Young Olympians forum at the of Sports technologies center of Moscow department of sports and tourism (Soviet Army str., 6). It is organized by Russian Olympic Committee in cooperation with Russian Anti-Doping Agency "RUSADA", the Ministry of sport of the Russian Federation and Moscow Department of sport and tourism with the support of the International Olympic Committee (IOC). Event starts at 11.00. Registration of media representatives starts at 10.00.

The main objectives of the forum are anti-doping prevention and promotion of zero tolerance toward doping among young athletes, including the Russian Olympic team candidates for the III Summer Youth Olympic Games which will be held from 6 to 18 October 2018 in Buenos Aires (Argentina).

The forum includes lectures by WADA and RUSADA representatives on the main anti-doping rules violations and liability for those, the features of the doping control procedure at major sport events.

Young Olympians will be able to test their anti-doping knowledge in mini-groups when analyzing simulated situations with the help of "Play True" Outreach program and "Buenos Aires" quiz, as well as during the brain-ring game "To Clean sport".

In addition, everyone will have opportunity to take part in RUSADA photo session. Any person to make posts in social nets with #FairPlay and #WinClean hashtags gets a gift.

There will also be opportunity to talk to and ask questions to all guests of the event, including invited Olympic athletes.