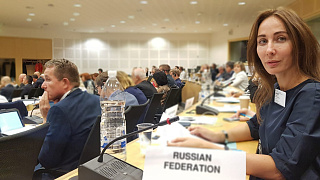 September 10, 2019, RUSADA Deputy Director General Margarita Pakhnotskaya took part in a meeting of the Council of Europe’s Advisory Group on Legal Issues (T-DO LI) of the Monitoring Group of the Anti-doping Convention in Strasbourg (France).

The agenda of the meeting was devoted to 2021 World Anti-Doping Code and International Standards Review, issues of criminalization legislation related to doping and legal protection of athletes’ rights.

At the meeting, Margarita Pakhnotskaya made a presentation on cooperation with law enforcement authorities in the field of anti-doping rule violations’ investigations, and also shared the results of the Ad hoc work of the Council of Europe group on Whistleblower protection in antidoping, which was created in May 2019 and is chaired by RUSADA Deputy Director General.

September 11-12, Margarita Pakhnotskaya attended the 47th meeting of the Ad Hoc European for World Anti-Doping Agency (CAHAMA), in which elections in the executive committee and the WADA founding board WADA were held.