RUSADA presents the comic book “The Dream to Win”

RUSADA presents the comic book “The Dream to Win” based on the fairy-tale by Margarita Pakhnotskaya. It tells the story of the friendship of two athletes in terms of values of sports and importance of fair play.

The comic book is available at: 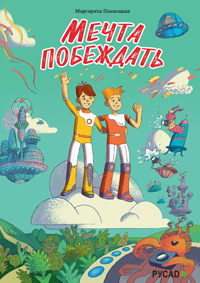 The fairy-tale “The Dream to Win” by Margarita Pakhnotskaya was released in April 2018 and translated into 3 languages (English, French and German). The tale became a part of the RUSADA “School toolkit”, designed for both sports and comprehensive schools and aimed at the prevention of doping in sport.

RUSADA conducts not only seminars for athletes and athletes' personnel, but also school lessons on sport values, which are an important part in establishing anti-doping culture in the country. Thus, as a part of the All-Russian contest “Healthy Movement” of the Russian School Movement, chaired by an astronaut and member of RUSADA supervisory board Sergey Ryazansky, teams of participants from all over the country conducted (from October, 20 to November, 5) lessons on clean sport values, based on materials developed by Russian Anti-Doping Agency.